In oTree, a session is an event during which multiple participants take part in a series of tasks or games. An example of a session would be:

“A number of participants will come to the lab and play a public goods game, followed by a questionnaire. Participants get paid EUR 10.00 for showing up, plus their earnings from the games.”

If a game is repeated for multiple rounds, each round is a subsession.

oTree’s entities can be arranged into the following hierarchy:

In Python, self is an instance of the class you’re currently under. If you are ever wondering what self means in a particular context, scroll up until you see the name of the class.

For example, in this code, self is a player (an instance of the Player class).

The name self is just shorter and more convenient than player.

This is similar to how people don’t use their own names when they talk about themselves; they just use pronouns like “me”, “myself”, and “I”. So, self is basically a pronoun.

Here is a diagram of how you can refer to objects in the hierarchy within your code: 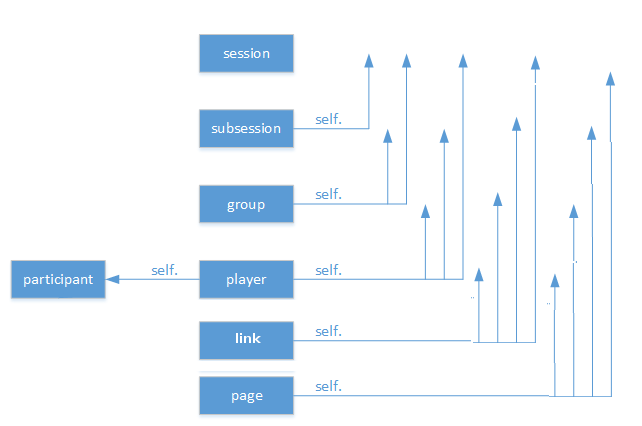 For example, if you are in a method on the Player class, you can access the player’s payoff with self.payoff (because self is the player). But if you are inside a Page method, the equivalent expression is self.player.payoff, which traverses the pointer from ‘page’ to ‘player’.

Here are some code examples to illustrate: